from a configurational perspective.

It is a fairly unanimously accepted,

and logical, assumption that stellar and planetary

bodies are formed by aggregation of material

from dust clouds. Generally referred to as an

‘accretion disc’ from which gravity attracts

material to increase the mass of the body.

This process is initiated as a result of electrical

and gravitational attraction and eventually

gravitational forces overcome all others and

the body is compacted and grows as more

Naturally the heavier materials will migrate

toward the gravitational centre and the lighter

materials will be forced towards the outer layers.

This scenario is fairly realistic to a certain extent

but as the body grows gravitational forces will

realign and the gravitational concentration will

not be at the centre of the body.

the body but gravity is NOT a

It remains an attracting force...

……a force of tension exclusively 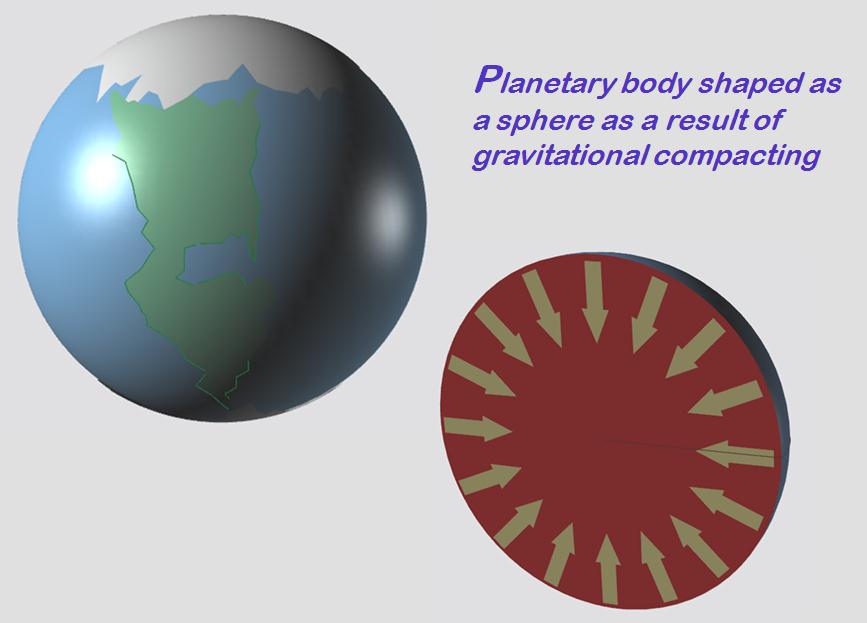 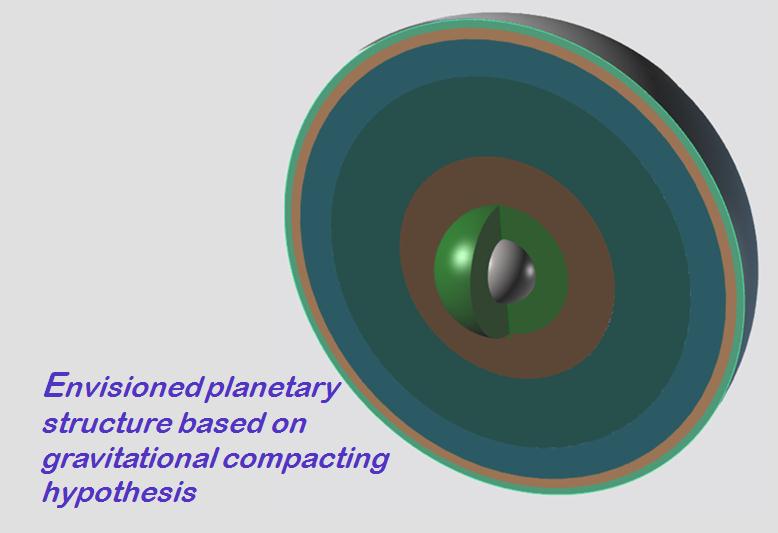 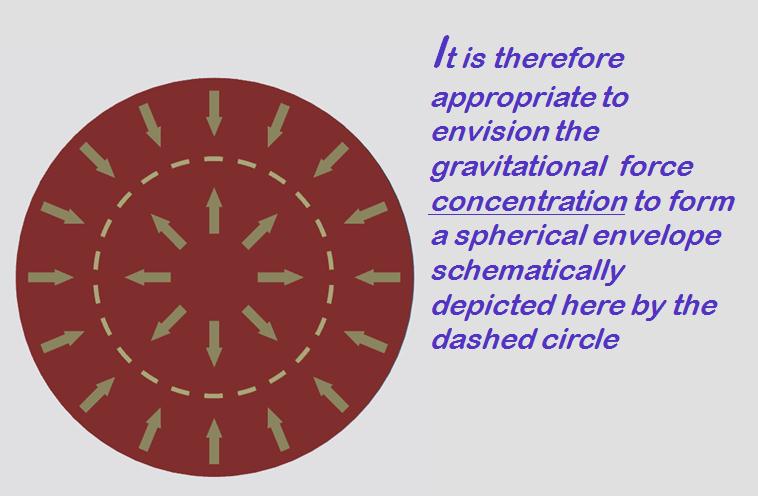 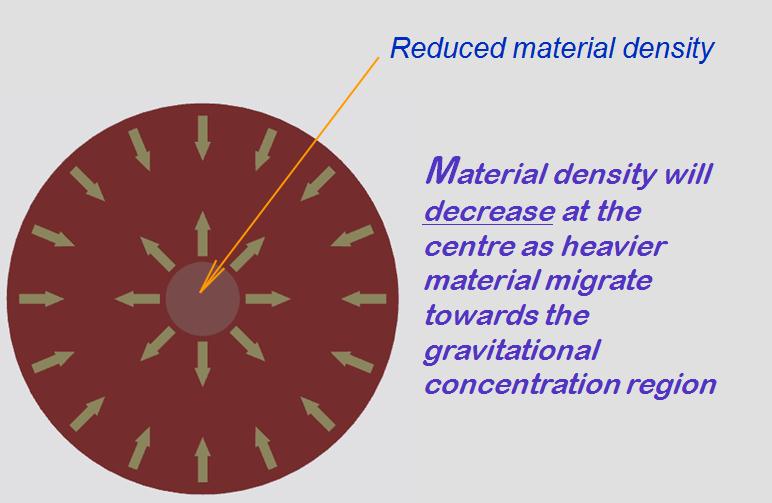 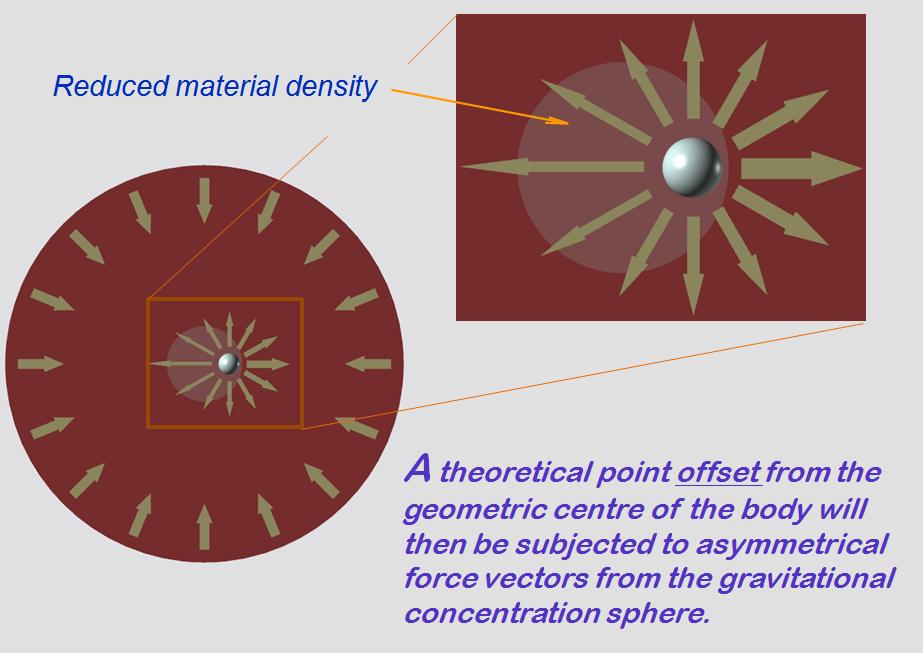 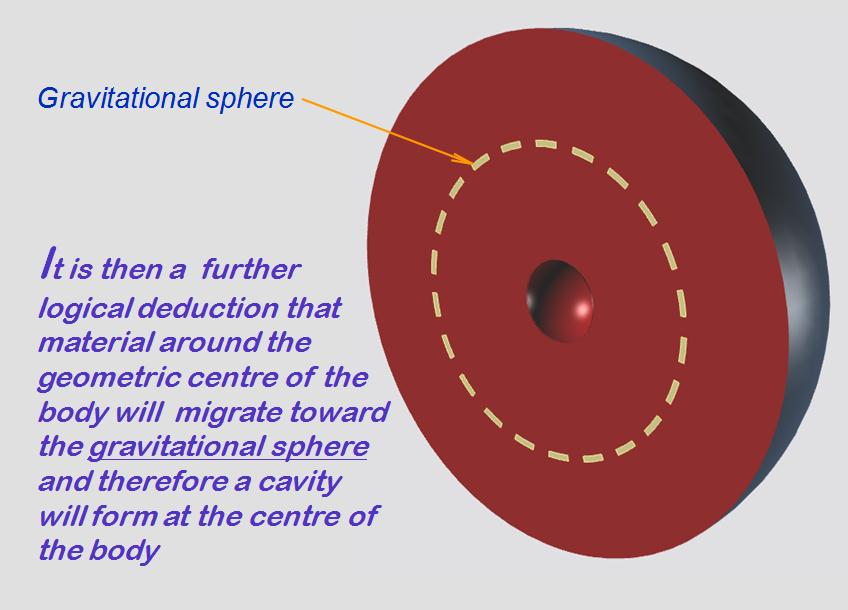 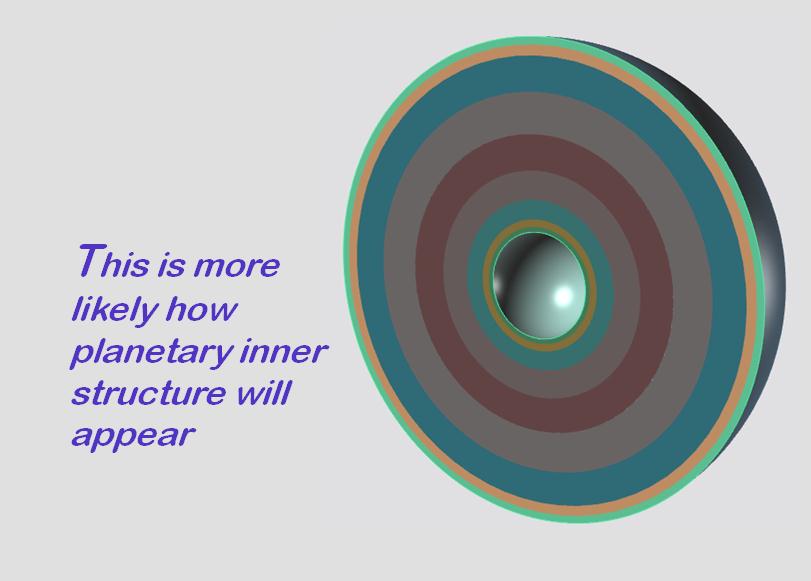 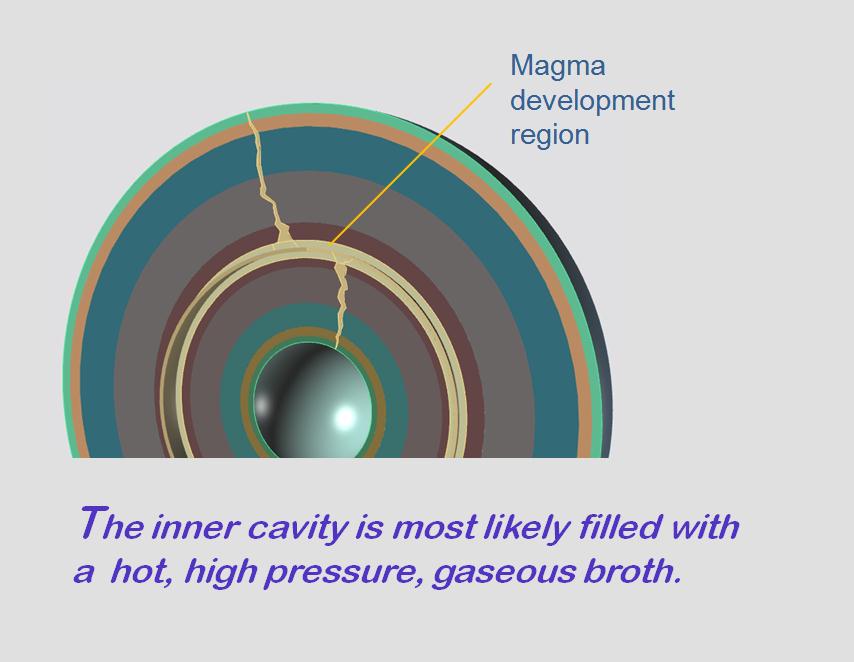 Further discussion on the hypothesis

In a solid nickel/iron ball the size of earth

this cavity forming process will not happen

but in a forming body subjected to dynamic,

fluid type conditions the gravity will alter the

internal structure and the gravity concen-

tration will realign to the spherical form.

The centre material will experience attraction

from the surrounding mass so heavier

materials will not remain in the centre.

....Heavier materials will not remain in the

centre. That is the important aspect.

As the heavier materials gravitate outwards

.....a gravitational concentration sphere will

Then the cavity will form. In a planet the size

of earth that cavity could increase to

The ‘gravitational concentration sphere’ hypotheses could possibly be an explanation for the axis aligning orientation of the moon around earth. 'Tidal lock'

Theory -   As the moon formed inside the accretion disc a large, solid object remained at the centre as material was added to the main body. The main body then grew to the point where the gravitational concentration became spherical and gravitational tension started acting on that central object. At some point, after the main body had some time to cool down, equilibrium was disturbed and the object moved off the centre position and embedded into the inner side. This caused lopsided mass distribution which eventually ended with permanent alignment to earth’s gravity

This theory is also applicable to Uranus with it’s rotational axis pointed toward the sun.

Most interesting would be the inner structures and conditions of stellar bodies.

The inner cavity of a star is a cauldron of astronomically () high pressures and temperatures.

The cavity is filled with a gaseous plasma at millions of degree C and pressures of millions of bar. The pressures are so enormous that it could account for significant expansion of the star’s diameter.

The entire shell of the star is a liquid plasma and is structurally contained as an envelope by the tremendously powerful gravitational concentration sphere. 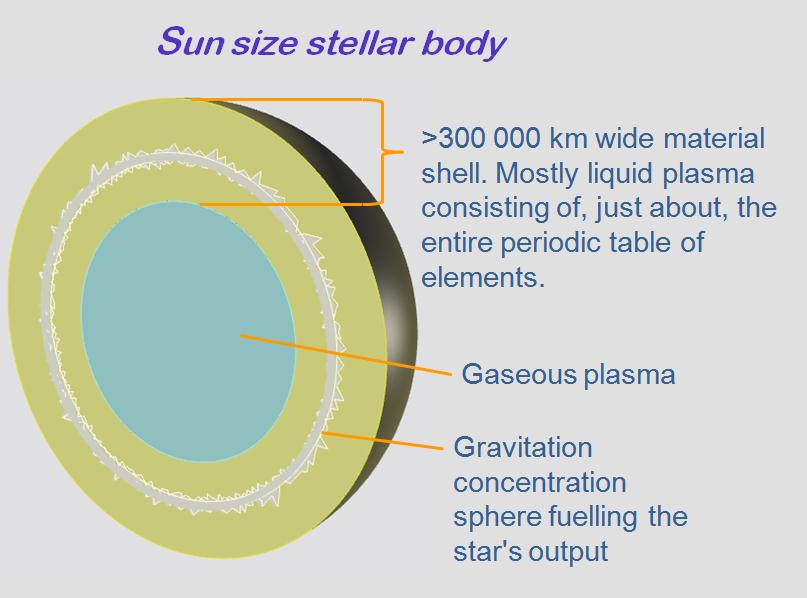 The star will ignite by the gravitational

but it is not certain that enough fusible

gas will remain in that high pressure

region to keep it burning for such a long

duration. Fusion may not continue for

more than a few million years at most.

Although gravity remains the continuous

driver of the star’s energy the largest part

of the radiated energy comes from the

and in the outer atmosphere.

on the electric plasma of stellar atmospheres.

For a star the size of the sun the shell will

the distance from earth to moon!

Just as ejections are observed on the

outside of the sun so there are ejections

into the inner cavity. But that is not how

is first energised during the nuclear ignition

stage of the star and this energy state is then

perpetually maintained by the continuous

gravitational flux. There may be a settling

period after the nuclear phase where the

This is not to say there would not still be

some fusion activity continuing but it would

radiated energy as hypothesised in the

The inner wall of the material shell is by

The inner cavity of a star is a very interesting

environment but it is not clear how the ionised

gasses and materials will behave under such

highly compacting pressures at such

The density of the sun is determined to be only about 25 percent the density of earth. Intuitively that does not seem realistic. With the sun at the centre of the original aggregation disc it is more reasonable to expect the sun to be at least as dense as earth if not more so.

The extreme temperatures raging inside the sun would  of course be expected to have an effect on the mean density but then the enormous gravity would offset the effects of the thermal expansion....

The enormous cavity inside the sun can very easily account for this density anomaly.

Please feel free to criticise this